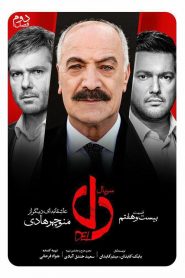 It is the story of two families, a girl and a boy, who are planning to marry each other, but there are problems that cause a gap between them, and … In Del Part 27 Saeed Rad, Hamed Behdad, Yekta Naser, Kourosh Tahami, Afsaneh Baygan, Bijan Amkanian, Nasrin Moghanloo, Mehraveh Sharifinia, Mehdi Koushki, Ali Sokhango, Leila Zare, Bahram Afshari and Maryam Saadat have played roles . Also, Saeed Khandaghabadi was the host of this series. The series was written by Babak and Meysam Kaidan and produced by Javad Farhani. The series “Del” has been filmed in Tehran and some northern cities of the country for seven months.